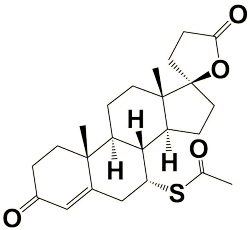 What Is Spironolactone? (Aldactone)

Spironolactone is one of our GMP Approved Pharmaceutical Ingredients. It is a white to off-white powder. Spironolactone is a potassium-sparing diuretic that competitively inhibits mineralocorticoid receptors in the distal convoluted tubule to promote sodium and water excretion and potassium retention.

Spironolactone is mainly used for:

2. Edema in cirrhotic adults not responsive to fluid and sodium restrictions;

4. Primary hyperaldosteronism long-term in patients with aldosterone-producing adrenal adenomas that are not candidates for surgery or patients with bilateral micro/macronodular adrenal hyperplasia

5. Add-on therapy in hypertension, and nephrotic syndrome when treatment of the disease as well as fluid and sodium restriction with other diuretics is inadequate.

Spironolactone is also frequently used for its antiandrogenic effects in transgender female patients due to its low cost and reducing male-pattern hair growth.

As we all know, both spironolactone and eflornithine hydrochloride can be used for female facial hirsutism, but what are their differences?

Spironolactone is made into tablets or oral suspensions but never used topically. While eflornithine is mainly made into topical creams well-known as Vaniqa of Gillette. There was an eflornithine injection, but it was discontinued for safety reasons.

Eflornithine hydrochloride is also used to treat hirsutism, but it works by interfering with a chemical in hair follicles under the skin to slow hair growth when applied topically. Please note, eflornithine topical does not permanently remove facial hair or prevent hair growth.

In clinical studies with Vaniqa, 81% percent of women showed clinical improvement after twelve months of treatment. Positive results were seen after eight weeks. However, discontinuation of the cream caused regrowth of hair back to baseline levels within 8 weeks. But eflornithine topical cream does significantly reduce the psychological burden of facial hair.

Spironolactone may increase the excretion rate of acarbose which could result in a lower serum level and potentially a reduction in efficacy. The risk or severity of hyperkalemia can be increased when Spironolactone is combined with Acebutolol.

Alcohol can increase the chance of certain side effects of spironolactone so alcohol should be avoided while taking spironolactone.

If you only have an order for 1kg, the spironolactone door-to-door price by courier is around 450~550usd.

Leave us a message to get the latest price update!