99% Amphotericin B Powder Manufacturer and Supplier

Looking For The Largest Amphotericin B Manufacturers In China? Contact Us Now!

Why You Should Import Amphotericin B Powder From Us?

Our MOQ for liposomal injection-grade powder starts at 1KG, but the topical type starts from 100G.

We can provide customized packages for your lab research.

If you are taking a standard package, we can ship it out within 2 days and provide you with the tracking by FedEx.

What Is Amphotericin B Powder?

Amphotericin B is a yellow to orange powder used as an antibiotic, a polyene antifungal antibiotic produced by Streptomyces nodosus.

It is insoluble in water but easily soluble in lipids and is one of our competitive pharmaceutical ingredients with China GMP.

Amphotericin can bind to ergosterol to depolarize the membrane and alter cell membrane permeability.

Important intracellular components will leak from cells to cause bacterial cell death.

As a broad-spectrum antifungal antibiotic, it is effective against many fungal species.

Its common side effects include mild to moderate serum aminotransferase elevations and hyperbilirubinemia, but very rare to see acute drug-induced liver injury caused by it.

How Is Amphotericin B Powder Produced?

When considerable potency units are reached, amphotericin is extracted from the fermentation broth.

The amphotericin produced by fermentation contains two components, A and B.

The A component is less toxic and has a weak antifungal effect, so it doesn’t exert much economic value.

While our target molecule, the B component, has a strong antibiotic effect and is named amphotericin B.

The final product is obtained by isolating component A and purifying B.

The solid medium suitable for the growth of the bacterium is screened out as the MS medium.

The optimal carbon and nitrogen sources were glucose and beef paste.

The yield by the process above could reach 2710 mg/L.

Next, the fermentation conditions of flask-shake were optimized:

The effect of shear force on the fermentation was investigated, and it was found that the addition of a certain amount of glass beads to the fermentation broth could significantly promote the production of Amphotericin B.

The yield could reach 4563.2 mg/L when glass beads were added at 60 beads per bottle, which was 341.1% higher than that of the control group.

The microscopic observation of the fermentation broth showed that the mycelium was significantly improved, and the mycelium was loosened, which was more favorable for the strain to take in nutrients and oxygen.

When studying the fermentation process of Streptomyces nodosus ZJB15076, it was found that after a short adaptation period, Amphotericin B synthesis started rapidly around the second day after inoculation, stopped growing around the sixth day, and reached the highest yield around the seventh day.

Finally, the effects of stirring paddle type, stirring speed, and aeration on the fermentation yield of Amphotericin B in a 5L fermenter were investigated.

The experimental results showed that the six straight-bladed disc turbine stirrer was more suitable for Amphotericin B fermentation production than the other two types of stirrers, and the optimal stirring speed was determined to be 400 rpm and the optimal aeration rate was 1.5 vvm.

The effect of staged temperature-controlled incubation on Amphotericin B synthesis was investigated.

However, it was found that the fermentation yield was not significantly promoted by the staged temperature-controlled incubation, and only increased by 5.9% compared with the control group.

The mechanism of metabolic regulation in the biosynthesis of amphotericin B is complex.

Modern genetic engineering and metabolic engineering techniques have been widely used to enhance the production performance of strains to improve the yield, but less research has been conducted on the control of the fermentation process.

To further optimize the fermentation process of amphotericin B and reduce the production cost, it is important to develop novel fermentation control strategies.

We screened a strain of Streptomyces nodosus with high amphotericin B production and investigated the effects of key precursors and differential metabolites as an additive on amphotericin B biosynthesis based on the existing metabolome analysis.

The fermentation process was optimized by combining the phase-control strategy and the supplementation method to increase the production of amphotericin B and reduce the content of amphotericin A as a by-product.

The key precursors and differential metabolites were screened based on the analysis of significant metabolic differences during the shake flask fermentation process, and a rational design of single-factor optimization and orthogonal co-addition strategy was proposed.

Because of the partial growth coupling type of amphotericin B fermentation, a phased control strategy was used to investigate the effects of phased pH, temperature, and dissolved oxygen control strategies on Am B production.

The effect of different regulatory strategies on the metabolic process of the bacterium during the synthesis was also elucidated by extracellular organic acid analysis, which further indicated that the fermentation regulatory strategy combined with metabolic control played a decisive role in the whole process of biosynthesis.

Based on the study of shake flask additive, we conducted an amplification experiment of additive supplementation in a 5 L fermenter and demonstrated the effectiveness of adding the above four compounds simultaneously in a 5 L fermenter,

We speculate that the increase in yield may be due to the decrease in the catalytic activity of the enoyl reductase structural domain in Amph C PKS module 5, which led to the inhibition of Am A synthesis;

Based on the previous experimental study, the best-combined control strategy was carried out to improve the yield and reduce the by-product content, i.e., the fermentation was supplemented with 4 mg/L isopropanol, 89 mg/L alanine, 1 g/L pyruvate, and 25 mg/L nicotinamide at 24 h of fermentation.

The yield finally reached 18.39 g/L, which was 85.9% higher than that of the split fermentation, and the maximum bacterial volume (PMV) reached 45.0%.

The by-product content was 2.1%, which was 32.8% lower than that of the split fermentation;

Through the detection of extracellular organic acids, changes in the concentrations of α-ketoglutarate, pyruvate, and citric acid were identified as the most critical metabolite nodes, thus further elucidating the possible metabolic mechanisms under this fermentation regulation strategy.

Finally, we conducted a scale-up study on a 50 L fermenter, and the above different fermentation control strategies have provided new guidance for the production on an industrial scale.

What Is Amphotericin B Used For?

Amphotericin B is a polyene antifungal antibiotic that inhibits fungal growth by affecting cell membrane permeability.

It has been made into medicines with dosage forms of injections, capsules, etc, but it has other usages.

Below we compiled its main uses, take a look:

It is used clinically for the treatment of severe visceral or systemic infections caused by deep-seated fungi.

It is also indicated for the treatment of the following fungal infections:

Externally, it is used for:

Due to the apparent toxicity, doctors would need it for the diagnosis of established deep fungal infections (also known as culture or positive histological tests) in patients with critically progressive diseases.

#3. Cell cultivation in the lab

Lab scientists use it to prevent the cell culture contamination of yeast and multicellular fungi.

It changes the fungal plasma membrane permeability so the fungi will not grow there.

Caution: it is not allowed to be used in patients who have no obvious clinical signs of fungal infection but only show positive skin or serum tests.

What Are Amphotericin B Side Effects?

Intrathecal injections can cause pain in your back and lower limbs.

It is toxic to the kidney and can cause proteinuria and tubular urine.

Doctors have suggested stopping the medication When urea nitrogen is >20mg/dl or creatinine >3mg/dl.

Or you have to lower the dose according to the advice from your doctor.

Other side effects may include declining numbers of white blood cells; instability of anemia and blood pressure; liver damage; diplopia; peripheral neuritis; rash.

During the process of medication, some patients may experience accelerated heart rate or ventricular fibrillation.

Those symptoms are most likely related to the high dose or fast injection.

There are liposomal injections or lipid complexes available in the market to cause fewer side effects.

Those dosages can greatly improve its safety and efficacy.

How Much Does Amphotericin B Powder Cost?

There are 3 types of bulk powder in the market: oral/topical grade, injection grade, and liposomal grade.

For topical grade (HPLC purity around 80%) powder with Commerical order quantities, our price is about 1600~1800 USD/kg as CNF by air.

For commercial quantities, the cost of injection-grade type(over 90% and more), our price is around 14000~15000usd per kilo.

This type has the highest purity and the most complicated manufacturing process, thus, it is the most expensive type.

For small quantities, the unit price can be over 25000usd/kg.

Due to small demand and rising costs of labor, and environmental protection, its price has been on a rise since 2010.

Here we draw a price curve below, check it out: 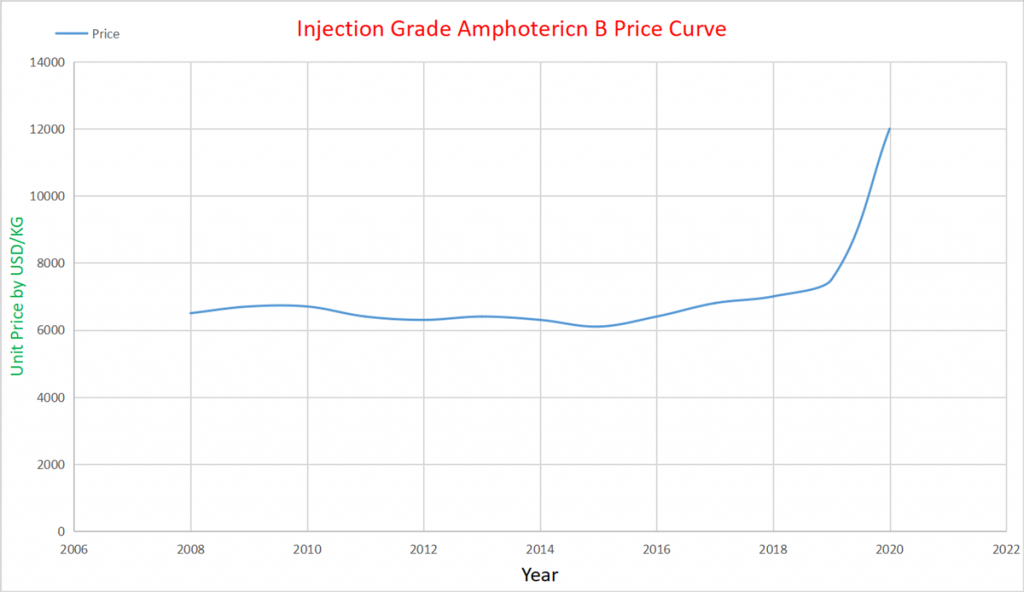 You can also check its export prices before 2016 from China to India as below.

There you can see the main-stream cost is around 7400 USD per Kilo. 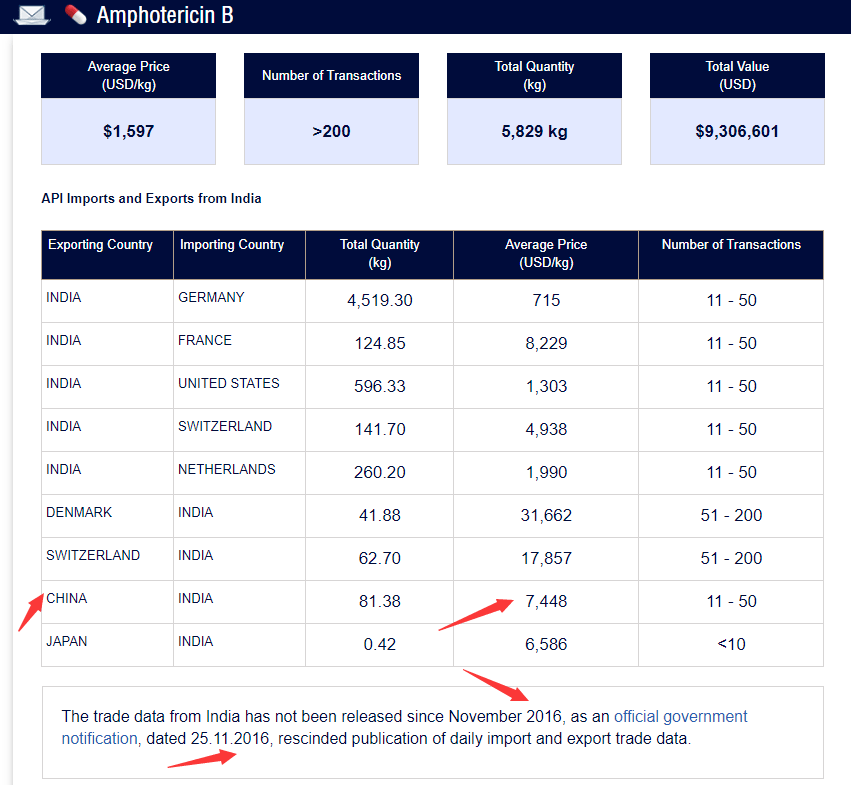 More importantly, after Covid-19 broke out, amphotericin B was found to be effective on certain aftereffects, it was sold out for several months.

Currently, we have the injection grade and several kilos of topical grade in stock for sale (not liposomal type), contact us now for a quick order before it is sold out again.

How To Transport and Store Amphotericin B Powder?

Amphotericin b is very sensitive to light, make sure to avoid direct sunlight during transportation and storage.

Transport Conditions: It is a safe and common chemical. Not dangerous.

According to testing results from DGM, it is said as below:

As an antibiotic, it is highly recommended to be shipped at low temperatures.

First thing first, there are two GRADES and three TYPES of amphotericin b powder for different dosage forms. shipping temperature and storage conditions are slightly different.

For Oral Grade or conventional type.

For the conventional type, we can ship it at room temperature but store it under a temperature of 2~8 Degrees Celsius.

Please keep it sealed and protected from light and moisture during your storage.

If you want to weigh some during the storage, make sure the sample doesn’t absorb moisture.

As we all know that a low-temperature chemical will draw moisture into the air. To avoid it:

1) you can weigh the sample after the whole package is back to room temperature naturally.

2) Weigh it under a moisture-free fume-hood if it is weighed under 2~8 degrees.

This type of powder is suitable to manufacture oral dosages and topical formulations, such as tablets, capsules, creams, emulsions, gels, ear drops, ointments, or some veterinary formulations.

For the shipping and storage of injection-grade, especially the liposomal grade, you have to take extra precautions.

You can not ship it at room temperature like conventional grade but have to transport it by cold-chain shipping methods.

Estimate how many days it will take to deliver it, add enough ice bags to keep it cool, at the same temperature we store it, 2~8 Degrees Celsius.

Of all those three grades, the liposomal type is the most expensive one and it has the highest potency.

We have to refine it by recrystallization at least twice to get it.

Other Antibiotics You May Need 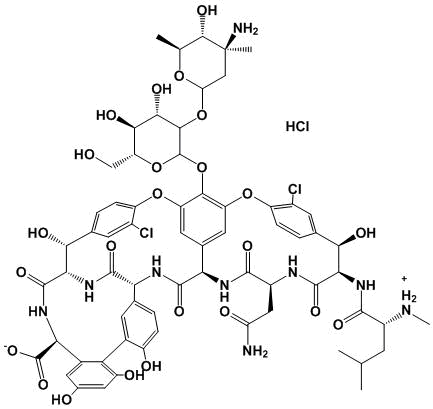